ACCRA - In countries such as Liberia, Nigeria, Uganda, Zimbabwe, Congo, Kenya and South Africa, women below the poverty line are forced to start sex work in order to feed themselves and their families, sometimes on top of their paid job. An international team of journalists, the AIPC, visited a few women and tells their story. The collective explains how they proceeded.

The African Investigative Publishing Collective (AIPC) is a team of investigative journalists. It is not an academic research institution or a polling or surveying agency, and we therefore did not aim to produce a scientific survey or a professional poll.

What we did do was the following:

-we approached women of working age randomly in poor communities, where we knew the living standard to be on or below the extreme poverty line of US$ 1,90 a day. This was done by a team of seven mostly female African journalists on the ground in their own countries.

-the list was the same in all countries. It consisted of fourteen questions: four that were generally poverty-related, and ten more about sex work. Women who said they never did sex work were not asked the ten ‘sex work’ questions.

-in most countries we approached a total of 30 women in two to three areas. The areas were chosen to include both urban and rural women.

-in two cases countries more than thirty women were interviewed because the team members felt they needed a bigger sample: in Zimbabwe forty were interviewed and in the DRC thirty-eight. This gave the DRC and Zimbabwe a bit more weight in the overall collection of responses, but we felt that that was acceptable since the two countries are not very similar and therefore the variety of the countries sampled would remain largely intact. (Also, all countries will be reflected individually in specific country chapters in the final report.)

-In Nigeria, two of the thirty interviewed had refused to answer some of the questions. These respondents were later excluded from the sample.

- We had also planned to include Mali as an eighth country in the interviewing exercise, but the interviewing there was not carried out as planned (only women who were already known to be sex workers were interviewed) and we therefore removed the Mali responses from the overall collection.

-the investigative report from Mali, that shows a clear link between bad governance, unemployment and sex work was still included in the narrative report.

-to protect the interviewed women’s privacy we changed all their names. 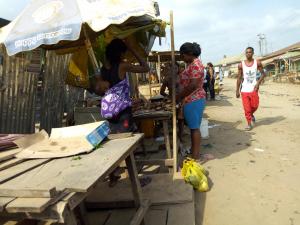